A video from Matt Parker and Numberphile, 383 is cool, sparked huge interest in the Primegrid project on BOINC.  You can join BOINC and Primegrid with just about any computer (I will give some instructions in a later post), but for doing real supercomputing, you will want to use a GPU (Graphics Processing Unit).  GPUs have traditionally have used for gaming purposes, but as scientists realized the computing power inherent in the GPU, uses outside gaming started to proliferate.  A single GPU unit can perform calculations 50-200 times faster than a single CPU.

This post will discuss how to build a computer with 3 powerful GPUs that is still climbing up the contributor’s rank list at Primegrid – I hope to make it to the top 3.

To incorporate multiple GPUs in a single case, there are a number of things to worry about that you don’t worry about in a basic CPU and motherboard build:

Before we get into building the computer, here are the parts we selected: 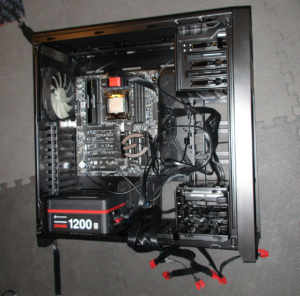 Case with power supply before other stuff.  The order you assemble this computer can reduce the hassles, so here is what I found worked for me.

This picture shows the computer with the motherboard and power supply installed, before the CPU cooler and GPUs go in.

Here is what the finished install looks like.  You can see that we have room for one more GPU, if we want to go all out!

The CPU cooler fans are oriented to blow air towards the back of the case.  This is a must since the front fans and back fan are oriented the same way.  There is a very small, yet positive, clearance between the CPU cooler and the EVGA GPU.

Once everything is wired up and double checked, hook up a DVI/HDMI monitor and keyboard and fire it up.

You should adjust any BIOS settings you need before installing the OS.
Next post:
installing BOINC on multi-GPU computer

Relevant items at Amazon: (If you can’t see them, turn off your ad blocker)