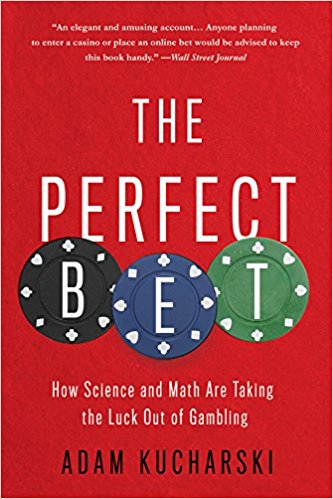 From 1993 to 2010, Joan Ginther won four jackpots in the Texas scratchcard lottery, totaling over $20 million.

Although Ginther has never commented on the reason for her multiple wins, some have speculated that her statistics PhD might have had something to do with it.

Adam Kucharski, an assistant professor in mathematical modeling at the London School of Hygiene and Tropical Medicine, in his recent book, amuses and informs about the ways math and gambling have been connected throughout history.

In 1892, Karl Pearson decided to study the Le Monaco newpaper’s record of roulette outcomes to see if they were random.  As he studied the data, he found a number of anomalies.  Unfortunately for aspiring gamblers, it turns out that the data had been faked by reporters who were too lazy to record the actual numbers.

Kucharski outlines a number of cases where math did serve the gambler.

He talks about the MIT’s Ed Thorp, who basically invented blackjack card counting with his book Beat the dealer 1.

Did you know the Eudaemons built a roulette beating computer device 2? Hint: It has to do with physics, centripetal acceleration and friction.

He covers how Mohan Srivastava cracked an instant tic-tac-toe lottery game due to a design flaw. He details how teams, including one from MIT, beat the Massachusetts state lottery in the 2000s. See 3 for even more details on this one.

He talks about horse racing, including the use of modern techniques like machine learning, and how they have been applied to gambling. It’s not enough to just predict winners from results of previous races. It depends on which horses were running in those races and how they performed based on the groups they had been in previously, and so on.  It quickly become complicated.  But, as they say, if it were easy, everyone would be doing it.

From there, he moves on to soccer and sports betting.

He then take a few chapters to discuss the ins and outs of poker playing – both how computers have assisted players in improving their game, and how poker-bots have made a name for themselves in online poker rooms. There has also been an annual poker-bot competition at an academic artificial intelligence conference, where a team from the University of Alberta has dominated. Who knew?

While those looking for a handout of secrets to beating casino games will be somewhat disappointed, this book does provide some colorful background for those wanting to learn more about the ways math has been used in winning at gambling. It’s going to be up to you to figure it out.

The Perfect Bet, by Adam Kucharski
The Eudaemonic Pie, by Thomas Bass
Beat the Dealer, by Ed Thorp
How Not to be Wrong, by Jordan Ellenberg [My Review]